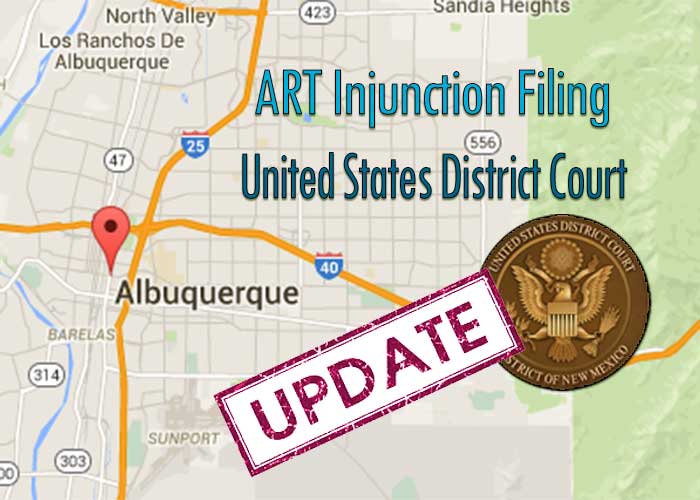 In the United States District Court for the District of New Mexico, Plaintiffs Coalition of Concerned Citizens to Make ART Smart et al. filed their motion against the FTA and the City of Albuquerque seeking to enjoin the funding and construction of the Albuquerque Rapid Transit (ART) project until they comply with federal, state, and local laws requiring an environmental review of the impact the project will have on the historic Central Avenue corridor.

A 47 page memorandum in support of the motion for preliminary injunction was filed in the United States District Court for the District of New Mexico on June 9, 2016. The conclusion, based on the supporting information provided in the brief, asserts that the FTA violated its NEPA (National Environmental Policy Act) obligations in excluding ART from a proper NEPA assessment and supports enjoining the ART project from proceeding until the FTA (Federal Transit Administration) has complied with NEPA by conducting an EA (Environmental Assessment) with an explanation demonstrating that it has actually taken the “hard look” at the environmental impacts of this project that NEPA requires.

“This lawsuit presents the opportunity to stop one of the most ill-conceived and poorly designed public projects which this City has witnessed since the demolition of the Alvarado Hotel in 1970.  Opponents to the hotel’s demise lost that battle; we are intent in not allowing history to repeat itself and are confident we can save Central Avenue” said Douglas Peterson, local businessman and plaintiff in the lawsuit, Coalition of Concerned Citizens to Make Art Smart v. FTA, et al.,  (D.N.M 1:16-cv-00252-KG-KBM).