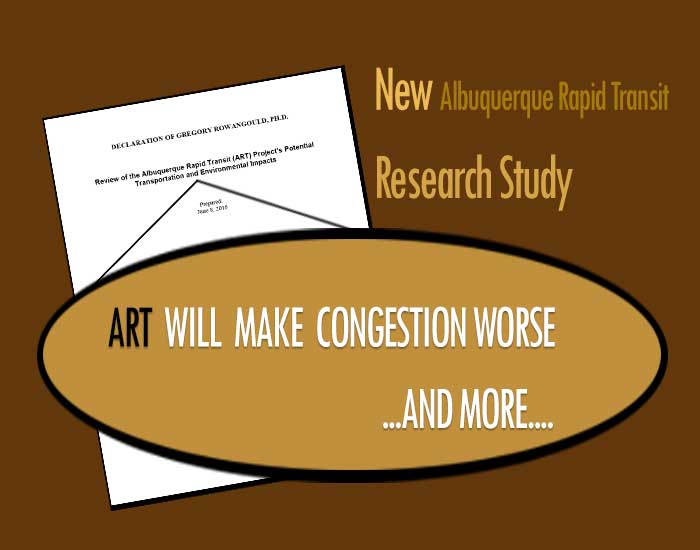 A new research study targeting the ART project, commissioned by Freedman Boyd Hollander Goldberg Urias & Ward P.A., is now available here on Make ART Smart. The report was completed by Gregory Rowangould, Ph.D., Assistant Professor in the Civil Engineering Department at the University of New Mexico since 2012. One of his primary areas of focus is on the role of transportation in the creation of more sustainable cities.

As Dr. Rowangould states in his introduction,

“…My review focused on two technical studies completed by ABQ Ride and its consultants that provided most, if not all, of the quantitative data that formed the basis for ABQ Ride’s opinions and claims made in its petition for a Categorical Exclusion and its Small Starts grant application to the Federal Transit Administration about the proposed ART project’s likely transportation benefits and costs and environmental benefits and costs…”

The report rigorously but fairly assesses the studies mentioned and the following statements are strongly supported:

…the analysis as completed by ABQ Ride and documented in the traffic study and travel demand study largely fails to support ABQ Ride’s main claims regarding the likely transportation and environmental impacts of the project. The traffic study clearly indicates that traffic congestion along Central Avenue will be significantly worse if ART is built. While initial traffic impacts are reported to be relatively small, they are still worse than they would be if the project was not built. In the future, traffic impacts are shown to become increasingly severe. The traffic study itself concludes that, “Under the 2035 Build Conditions, many intersections will perform deficiently due to insufficient capacity or green time for general purpose traffic, or other physical constraints.”4 The report continues by suggesting potential mitigation measures for particularly congested areas that include adding additional traffic lanes to Central Avenue, concluding that no mitigation is possible, or that ART bus only lanes should be removed5. Furthermore, while neither study, or any other studies, have compared the performance of ART with continuing to operate the Rapid Ride, my estimations based on data in the traffic study appendices and by comparing the travel demand study’s estimates with current Rapid Ride schedules indicates little, if any, travel time or reliability improvements will be achieved if ART is built. In fact, these comparisons indicate the ART may perform worse than the Rapid Ride would…”